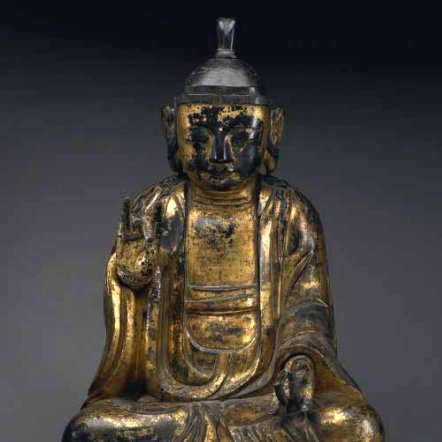 Wood with gilt, plus original sutra pages found within body cavity of sculpture

A bodhisattva is a merciful Buddhist saint and savior, a Buddha-to-be, who refrains from entering enlightenment out of compassion for all others striving to reach the same goal. This bodhisattva’s serene visage and his hands, raised in the abhaya mudra (gesture of fearlessness) and the varada mudra (gift-bestowing gesture), give the figure an intangible spiritual aura. He is seated in the lotus position, his calm, still bearing reinforced by a slight archaic smile below knowing eyes—an expression that was typical of regional Buddhist art schools throughout Korea during the mid-1600s.

Buddhist missionaries had established themselves in Korea by the mid- to-late fourth century. As it had in central Asia and China, Buddhism in Korea developed its own characteristics while incorporating traditions dating back to the earliest Buddhist artistic heritage.

This sculpture is a reliquary that would have originally been installed in a temple setting. Contained within the cavities of the head and body, were Buddhist texts that transformed this masterful carving into an embodiment of the divine. The bodhisattva’s body is carved from a single tree trunk, while the hands, face, hair knot, and base are separate pieces. The CAT-scan images show that the face was carved separately and then attached with lacquer after the consecrated texts were placed inside the head. The elongated ears were secured with handmade iron nails. The right arm continues the outgrowth path of a branch that originally was part of the tree trunk.

This bodhisattva was once in the collection of John D. Rockefeller, Jr. and strengthens the Harn’s Korean collection, which was established more than two decades ago with the donations of General James A. Van Fleet, who commanded the U.S. Eighth Army and United Nations forces in the Korean War. 2010 marked the 60th anniversary of the start of the Korean War.