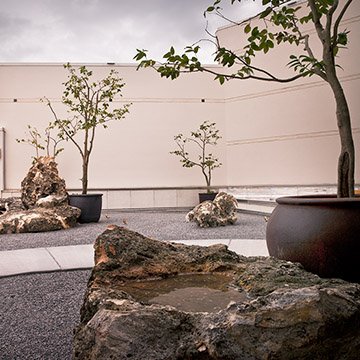 This garden is a contemporary adaptation of a traditional rock garden, a stylized miniature landscape which is meant to evoke the essence of natural elements. Minimalist in style, all unnecessary details are removed to provide an environment suited to reflection and relaxation.

Elements of stone are combined in elegant simplicity and can often have symbolic meanings. For example, a large stone can represent a massive mountain and the raked rocks of a dry garden can symbolize running water. However, there is no single way to interpret the garden. Your experience should be one of personal discovery and reflection.

This garden, designed by Hoichi Kurisu, was inspired by the karesansui, or waterless rock and sand garden. Karesansui is a very well-known type of Japanese garden. This type of garden appeared during the Muromachi period (1333-1568) in Japan and is influenced strongly by the Zen-Buddhist doctrine. A famous example of this type of Zen-garden is Ryoan-ji in Kyoto.

Traditionally, Japanese gardeners sought out local stone. Limestone is not a typically used in Japanese gardens, but as a native stone in Florida, it was the first choice for this garden. These boulders came from farm pastures about 60-70 miles away, where they had been exposed to the elements for decades. This gives them character and depth, and is an important factor in this minimal design style. Each boulder was placed by hand, using a crane. Most critical to the garden design is the angle and composition of the boulders. In the dry garden, the space between elements is as important as the physical elements themselves.

As with traditional gardens, the rocks are raked in careful arrangements to represent ripples in water and often include seasonal variations. This garden is raked several times a week by the Harn’s dedicated Asian Garden Specialist and volunteer, Martin McKellar.