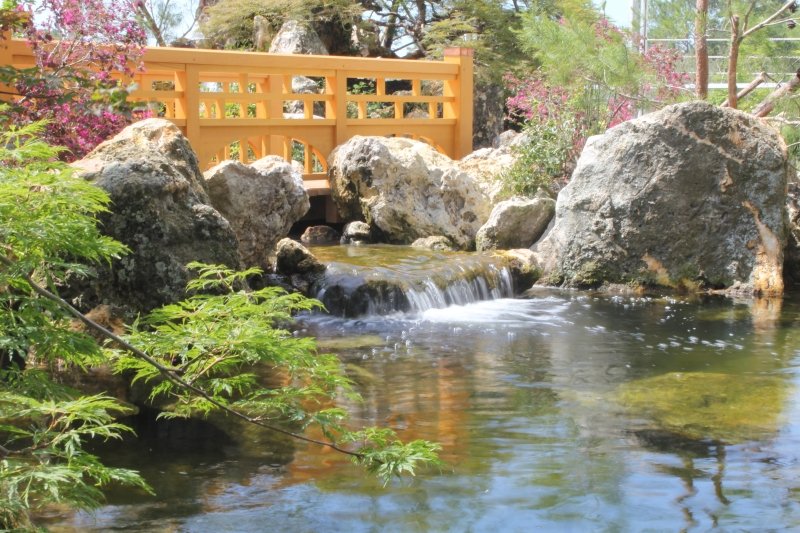 Inspiration from nature is a long-standing tradition in Asian art. Artists have reflected on the natural world for centuries, using natural materials as their media. Jade, stone, ink and inkstone, metals, and fired ceramics have imitated, given homage to, and commented on the world from which they came. Often these investigations have gone hand-in-hand with philosophical explorations into the nature of the cosmos and humanity’s place within it. This important connection led to the design of the galleries and the gardens to recognize and emphasize the continued relationship between art and the natural world.

This garden includes a mixture of both native and exotic species ranging from sweet magnolias and wild azaleas to Japanese camellias and maples. The bridge material is local pine that was recovered from the river and the bench is Alaskan yellow cedar, with a surface decoration called naguri that gives it that hatched/scored look. The limestone (a native Florida stone) rocks were donated from museum supporters in Levy County. In short, the design of the garden had to be one that would be both reasonable to install and able to survive in our North Central Florida climate.

The landscape designer, Hoichi Kurisu, worked with a team of installers and carpenter to complete this garden for the opening of the David A. Cofrin Asian Art Wing in March 2012.

Kurisu International is among the top garden landscape and design build firms in the United States. The firm specializes in Japanese and healing gardens, committing themselves to utilizing nature as a way to provide inspiration, restoration and healing.