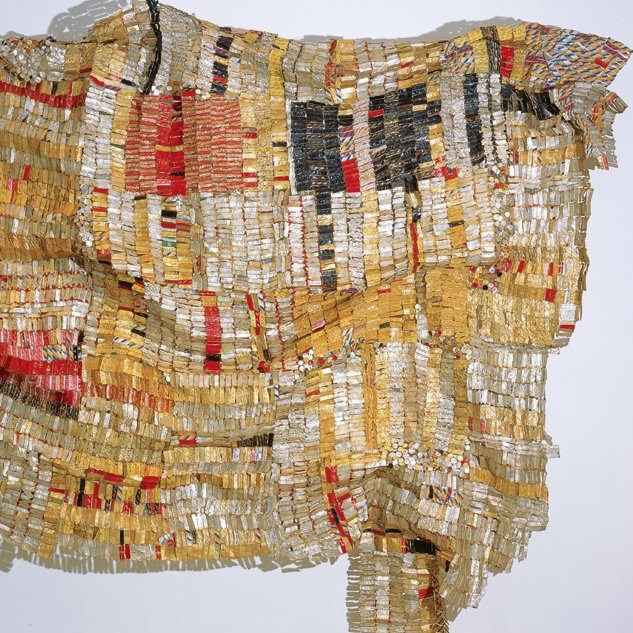 Museum purchase, funds provided by friends of the Harn Museum

El Anatsui has lived and worked in Nigeria since 1975. Over the past decade, he has emerged as one of Africa’s most widely acclaimed and influential contemporary artists. Anatsui has worked in several media; however he is best known for his luminous metal sculpture constructed from recycled bottle tops. Large in scale and rich in color, these sculpted “cloths” are stunning works that suggest the power and opulence of royalty. Nonetheless, the artist’s work is deeply embedded in the challenging social conditions and political realities of Africa.

Anatsui’s Old Man’s Cloth is inspired in part by kente cloth, the royal and ceremonial strip-woven cloth made by the Asante and a prestigious cloth made by Ewe people of Ghana and Togo. Kente cloth is hand-woven into four- to eight-inch strips that are sewn together to form a unique and single geometrically patterned cloth. Color and design convey specific meanings. Anatsui uses a similar process; however the fragments which constitute his work are the flattened tops of recycled liquor bottles created by Nigerian distilleries. Names such as Chairman, Dark Sailor, and King Salomon are written on the labels—words that evoke and relate to the history of liquor imports by Europeans from the West Indies to Africa. The bottles recall the colonial trade in slaves and commodities. Anatsui’s eye is also on the consumptive drive of globalization and economic imbalances. El Anatsui merges traditional art with contemporary practice, local events with global economies, and historical narratives with the present moment. In unexpected ways, he transforms the detritus of contemporary life into compelling work of beauty and multiple meanings.

Anatsui’s personal and professional life mirrors the cross-cultural character of his work. He was schooled in a British education system that often overlooked indigenous culture; however his father and brother were expert weavers of traditional Ewe kente cloth. He studied European art at the Kwame Nkrumah University of Science and Technology in Kumasi, Ghana. At the same time, he immersed himself in workshops of traditional craft. In 1975, Anatsui began teaching at the University of Nigeria Nsukka, where he is still a professor. There, he joined those who argued against formal British training to advocate and champion indigenous art.